(iii) There are only finitely many ways to construct such a subset \(S\).

Imagine the unit square in the plane to be a carrom board. Assume the striker is just a point, moving with no friction (so it goes forever), and that when it hits an edge, the angle of reflection is equal to the angle of incidence, as in real life. When it hits another edge it bounces again similarly and so on. If the striker ever hits a corner it falls into the pocket and disappears. The trajectory of the striker is completely determined by its starting point \((x, y)\) and its initial velocity \(\overline{(p, q)}\)

(b) Draw a trajectory with bounce number 5 or justify why it is impossible.

(d) What is the bounce number for the initial state \([(x, y) ; \overline{(p, q)}]\) where \(p, q\) are relatively prime positive integers, assuming the striker never hits a corner?

Shortest cycle on a carrom board

Suppose we had a carrom board shaped as a quadrilateral as shown below. The striker is at position P. We want to strike it so that it rebounds off the walls and returns to the starting position. At the same time, the length of the path that it traces before returning to P must be minimum. At which angle should we strike? 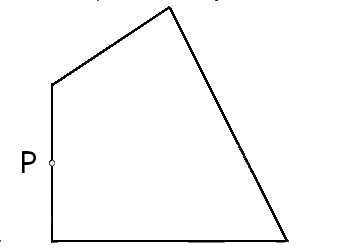 Watch this Youtube video by Zach Star, where he discusses an elegant solution to this problem. The problem seems to require calculus, but has a nice geometric solution.