Hazarding a guess at CMI ‘21 cut-off

Summary
As a fun exercise, I predict this year’s cutoff and explain my reasoning.

Update: The actual cutoff was 56, so the estimate was off by 2 marks.

I arrived at the above cut-off by using three heuristics. Take it with a grain of salt since it is based on unverified assumptions. This estimate is for the general category (non-scholarship).

All three papers had three routine problems of comparable difficulty (as shown in table below). So the difficulty level of the subjective part of the question papers is roughly the same. However, the objective part was slightly easier this time. So I expect the cutoff to be a little above 52.

I have conducted 12 mock tests since February. The scores of students who performed consistently well lie roughly in the range of 51-64. The cutoff is likely to be in the lower quartile of that range.

Over 100 students took part in the poll sent out last week. At first glance, the results seems to suggest that a score 70+ is needed to get through. But remember that the students visiting this site come from a pool of serious aspirants. The estimation needs to be done differently for such a biased sample. Here is one way:

What does that imply for the cutoff according to the poll? Note that there are 107-18 votes for 41+. Let us say 10 participants were in the reserved category. This means 79 students in general category have voted and have got a score of 41+. 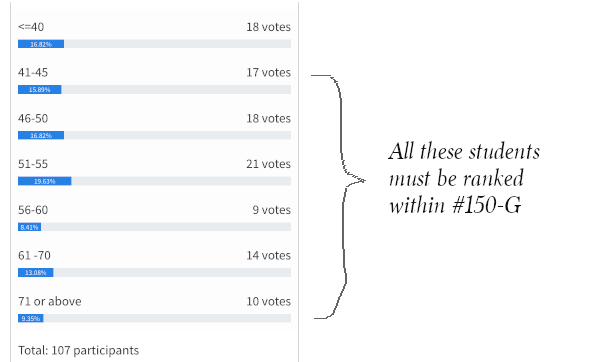 Hence, the expected number of students within rank #60G is:

So, 32 students who have taken the poll should make it! This puts the cutoff closer to 56 rather than 70.

Do I believe that 32 students from the poll will qualify? No, I don’t. Students are prone to overestimating their marks. This exercise was done mainly to show that one need not be alarmed by the poll.